THE SCIENCE OF MELTING AND CASTING METALS.

When metal is heated, its molecules start to move and the metal gets softer.  If you heat the metal enough, it will melt and turn into a liquid. Different metals have different melting points for example mercury -39°C or steel 1300°C.  They also take different amounts of energy to heat (to get its' molecules to move).  One kilo of Mercury needs 0.0333 kcal to be heated 1°C, steel needs 0.114 kcal. This factor is called specific heat.  When a metal is coming up to its melting point, it needs more energy to turn into a liquid. The temperature in the metal will not rise until the metal is molten. This energy will be returned to the atmosphere when the metal solidifies. It will cause the metal to stay pasty for a while before solidifying. The length of this stage depends on how much melting heat was necessary. For 1kg mercury this is 2.8 kcal and steel 49 kcal.
The more you heat a metal, the more liquids it will become. If you carry on heating it, it will boil (like water). This will happen to mercury at 357 C and steel at 2450 C. Under normal pressure this is the maximum temperature you can heat a metal. While heating a metal you increase the possibility that the metal will react with the air, oxidizing.  When molten, the metal will oxidize fast and it forms dross on the surface. Certain metals oxidize so fast that they have to be molten under a vacuum or covered with a non-reactive gas.

WHAT IS AN ALLOY?

Certain base metals could when molten be-mixed together thereby changing the properties of the base metals.  This new metal is an alloy.  By adding different metals in different quantities you can change a base metal to suit a commercial purpose. One good example of this is stainless steel, where by you make iron stainless by adding Chrome and Nickel.

Casting is pouring of a metal into a cavity of some kind and letting it settle to a new shape.  This technology has been known for thousands of years.  At that time the caster was a very respected craftsman with many years’ experience.  There are many factors, which influence the making of a successful casting.
For example:
Temperature: The metal must be liquid long enough to fill the cavity of the mould.
Shrinkage: When a metal settles it shrinks.
Alloy: The metal must be right for its purpose.
Mould: One must choose the right material for the mould, to withstand the temperature of the casting.

Of the above points shrinkage is the most important.  In the mould. the thinnest part solidifies first.  As the metal shrinks when settling, this part pulls liquid metal from a thicker part.  The next thinnest part does the same until the whole casting has settled.  This means that in the last part to settle you will be left with a hole or porous metal as there is not any more liquid metal to be pulled back. However an experience caster knows where that point is and he puts the in gate there. He also makes the in gate so thick that it will solidify last, thereby making sure, that the in gate will feed the casting, until all of it is solid.

The metal used for these experiments is an alloy of lead 54%, bismuth 35%, and tin 11%.  It is a low melting point alloy, which makes it safer to handle than other metals. It is also an outstanding example of how different an alloy can become to its base metals as you can see in this chart:

Other properties of this alloy is being very liquid and having a negligible shrinkage.  This makes it very suitable for model casting.
Most metals and alloys would expand when they are molten and shrink when they freeze. This can cause porosity in the castings.

There are 2 fundamentals in casting which are very important to understand namely ‘ The liquidity of the metal’ and  ‘Getting the air out of the mould’.  If you have a good understanding of these points every other aspect of metal casting can be understood.

Metal to cold: (ladle with cold metal).
Will solidify before reaching all parts of the mould.
To pasty to flow into all details.
Metal to hot:  (ladle with hot metal).
Burns the rubber.
Loss of metal through oxidisation.
Metal temp correct: (ladle with correct metal).
Metal will flow all the way into spears and swords etc.
Reproduce the finest detail of the figure.

Temperature is one factor that affects liquidity but also the type of alloy is important. Certain alloys are just more liquid than others. Prince August Model Metal is the most liquid metal we sell.

Getting the air out of the mould.

Our moulds are made of heat resistant rubber. Rubber has sealing properties, like you find in suction cups, washers, gaskets etc.. Hence the rubber will seal the air in the mould. Try to blow air into the ingate of a new mould and you will find that no or very little air goes in. (picture of blowing into a mould). The same thing will happen when pouring metal into a plain mould. (Picture of mould with incomplete casting)It is next to impossible because the air will not leave the mould. So the Prince August casting system has incorporated functions to get rid of the air.

Firstly we use a mould release powder, which not only prevents metal from sticking to the rubber, but it also releases the trapped air.  Try the release powder on a suction cup and you will discover that it will not suck to anything.  All of a sudden there is no seal between suction cup and the surface.  The same phenomenon effects the moulds when you put talcum powder on the inside surfaces.

Secondly we use flexible clamps or rubber bands to hold the 2 mould halves together.  When one pours the metal in, the clamps will flex and leave out the air. This flex is a very fine balance because the mould should only flex enough to leave out the air and not the metal. Sometimes this balance is not right and metal leaks out the side. This could be frustrating but just allow the metal to settle. Clean up the mould, remelt the metal. Assemble the mould halves carefully together and put an extra clamp on the place where the mould was leaking.

Thirdly the weight of the metal is important. The heavier the metal is, the easier it is to push the air out of the mould. Model metal is our heaviest metal. (pic of model metal)Some people use plastic resin in our moulds. Because plastic is light, it cannot push out the air and physical venting channels are necessary.

In latter years our figures have become more and more complicated. We are now doing bigger and fully rounded figures, loads of accessories etc.  This has created a necessity to vent some moulds. The principle of venting is to let trapped air out but it can also let the air faster out of the mould and the metal faster in. If the metal goes faster in, it is less likely to solidify before it has filled the mould cavity.

How to get air out of the mould:

Release powder.
Dust the complete inside surfaces with a light coat of powder. The powder will stick to the rubber in the quantity needed even if you clap the two mould halves hard together. 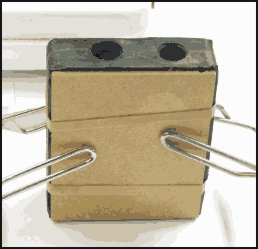 Vents.
Cutting vents is easy to do with a vent scalpel (now for sale at Prince August) or razor blade, which has to be very sharp.   Heating the mould in an oven to 50-70c will make the rubber softer and easier to cut.  Be extremely careful while cutting. The blade you are using is so sharp that it will cut into the bone.
All moulds will benefit from a vent but some need several vents. The first vent should be cut in the last bit to fill in the figure(photo).  Always let the vent go to the top of the mould. Use a biro to draw a line where you like the vent.  Use a ruler if you can. Then again using the ruler cut a 1mm deep and wide v-shaped channel. Cast a figure in the mould and study where you have missing parts. Say if you have a sword which is not filling, try cutting a channel from the top of the sword and the top of the mould.  You can experiment with several vents until you get a perfect result. Note that once metal comes up to the vent it will fill it and block any air from escaping ie the vent is now useless. Also remember even though the mould fills from the top, the metal will fill from bottom up. This  is important for your thought process to understand so you know when a vent is closed. Some alloys tend to need more vents than others. 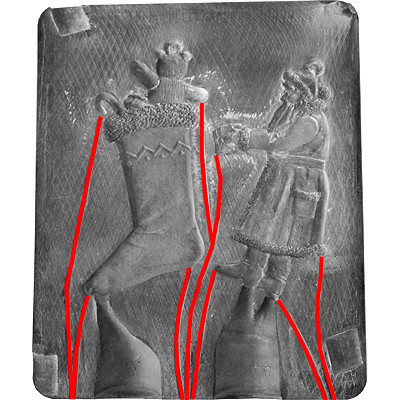 Sometimes you will have trapped air in a buried part and there is only one way of dealing with this. Take a fine drill bit 1-2mm and drill a hole straight through the mould. This will let the air through to the outside of the mould provided you put the rough side of the support board against the mould. The metal can go out through this whole as well but you can easely nip it off and clean up the surface with a knife or file.  It is therefore important to consider the cleaning up when you choose the place to drill ie you do not drill in the middle of a face or other places which are hard to clean.
Trapped air can appear in closed in areas like a canon wheel. The rim will entrap the air so the spokes will not fill. The solution here is to drill vents in the spokes or in between the spokes.

Another problem with air in the mould can be that it is actually steam. A mould, which has been stored in a cold damp place, will absorb water in the pores of the rubber. Remember when water turns into steam, it expand 2000 times. The only solution for this problem is heating the mould in an oven for a couple of hours at 60-70c. Or only store the moulds in a warm dry place.

How to overcome metal liquidity problems:

All metals have different properties.  The Prince August casting system can only use white metal alloys with a melting temperature of under 250c. We recommend casting at a temperature no higher than  375c, to save the moulds. Most electric cookers will only give a max temp of 325-330c. If you use pure lead, which melts at 327c, the metal is to thick to give really good result at safe casting temperature of 375c.  Instead choose a lead alloys which contains bismuth, tin and antimony.  A 10% addition of these metals will bring down the melting point of lead by 100c. However you have to add at least 30% to make the alloy substantially more liquid to suite our moulds.

The surface tension can be overcome by higher temperature but also by causing the mould to vibrate. A slight tap by the ladle after pouring is normally enough. However sometimes it is necessary to tap the mould with pliers while pouring.

There are no products listed under this category.