I chose this range for a few reasons. The biggest reason is that the 18th Century Uniforms are stunning, and look fantastic on a miniature battlefield. The Prince August mold sieries for this period is so complete, nearly everything one needs to war-game 18th c. wars is available, or easily converted!

I also am very much a fan of Holger Ericksson's figures, and I think he brought to this line solid anatomy, but in a way that "fits" with the ponderous, stylized fighting typical of the battlefields of Seven Years' War Europe. The follow up figures that are resculpted still maintain the 'toy' quality I prize in my figures.

Finally there is economy, The period originally caught my eye as a good candidate for war-gaming because most nations clothe themselves on a variation of turn-back coat and tricorne, so It was easy to paint the same figures so as to represent many different nationalities. That means I need fewer molds to begin with, although I love them so much I'm now well on my way to having all of them. I can make several figures for what I can spend buying and shipping other commercial figures in this period.

Thus, I get a beautiful soldier for less money! The photographs you see are taken on my kitchen table with a Nikon Coolpix 950 under a lightbox (used to replicate sunshine in our cold Alaska Winters). The figures are painted to represent the Austrian IR no.3, Lothringin, the Russian Apcheronski Regiment (on the advance). Paper buildings are print and play from Fiddler's Green.
Other scenics come from my wargaming box. The trees are just twigs and stuff I found at the craft store. 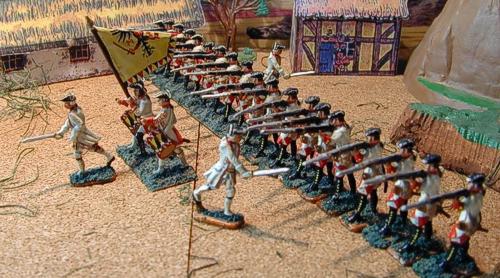 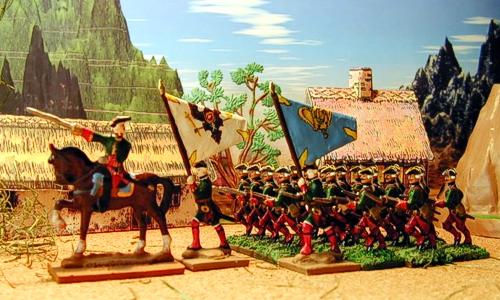 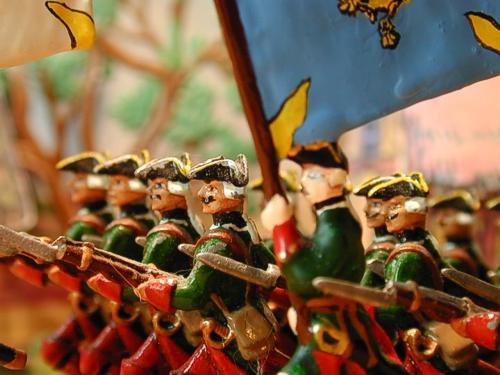 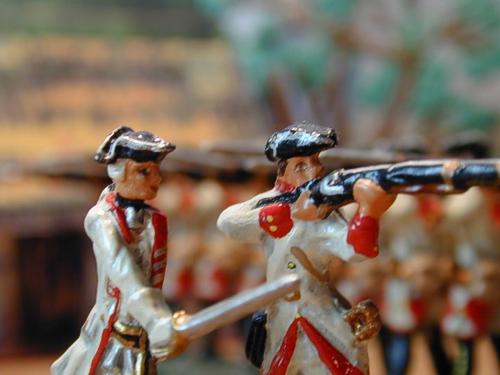